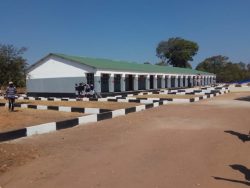 Addressing the gathering, Mr. Mwape stated that Zambia Scholarship Fund has been a key partner of the government in student sponsorship and school infrastructure development in the province, emphasizing that the government is grateful to Zambia Scholarship Fund and it’s donors for continued generosity. He observed that the timely completion of the facility will go a long way in addressing the shortage of classroom space, especially with the additional return of students due to the country’s recent implementation of the free education policy. He added that his government believes that the four classrooms (which are part of twenty one modern classrooms that ZSF has built) will provide a decent and safe learning environment for the pupils and subsequently improve their academic performance. Mr. Mwape concluded his address by urging ZSF and its donors not to relent in this noble student sponsorship and school infrastructure development projects observing that the organization has positively changed the lives of many vulnerable and marginalized citizens.

ZSF Advisory Committee Chairperson, Pastor Francis Mulenga, noted that Zambia Scholarship Fund remains committed to supporting vulnerable students in realizing their education for a better tomorrow and that the onus was on the students, to reciprocate by taking their studies seriously.

The people of Mulobola are happy to have a proper secondary school within their locality, which they yearned to have for many years. They are optimistic that the education facility built by Zambia Scholarship Fund is a turning point for their children and generations to come, given the vast opportunities that having an education provides.