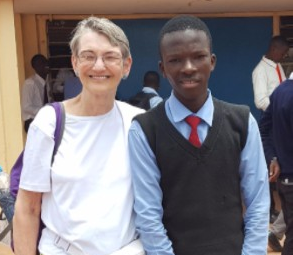 This story starts in 2015. We were doing our regular thing that we do each year and that is taking a group of volunteers from the USA to visit our schools in Zambia.

At each school the routine is always the same. We pull up to the school. We get out, all the students who are walking by stop to stare. We are led to the principal’s office and we wait.

In walks the principal and we introduce ourselves and we present him or her with a list of the students we are sponsoring at their school. Then comes the usual “oh Madame is there any way you can help just a few more students at our school?”.

This time we were at the Kasama Boys High school. When the principal started saying

“Oh madam can you help just one more boy?” One more boy? He proceeded to say that there is a boy living in the bush that tested higher than any other boy at his school (his school had 1800 students) and it would be a shame if he could not go on to attend high school.

Before I even got my answer out, Sandy Jensen, one of my volunteers, piped in, ” I’ll take him.” But Sandy you keep saying that at every school and we still have ten more schools to visit. I know, I know but I really do want to help this boy.

Thus Clement Mwenya became one of Sandy’s many students. Over the years he wrote beautiful letters to Sandy. Clement was amazing, his English was amazing, his penmanship was amazing, his art was amazing, in fact  there wasn’t anything this boy couldn’t do yet what was the most likable thing about Clement was his humility and his gracious heart. He was so full of gratitude and love that it spilled over in his letters and his sweet shyness intrigued each of us when we visited his school. It wasn’t long before Sandy began helping his two little sisters who, thanks to Clement, convince Sandy that they were as bright as he.

Now this is where the story gets good,

Clement finished high school and of course finished at the top of his class. And because his dream was always to become a doctor, Sandy agreed to help him all the way. He was off to Lusaka to attend the University of Zambia with Sandy as his sponsor BUT wait . . .

Last week Sandy got word from Clement that his best friend (who also wanted to become a doctor) father passed away. He wondered if Sandy could possibly help him. He sent the death certificate to Sandy and promised they would both pay her back someday. Sandy just informed me that she has agreed to help both boys.

“I mean it only makes sense since I have to pay for Clements room anyway.” She wants them to be roommates and she has agreed to pay for everything. She has even set up a trust fund for both boys should anything happen to her while they are in medical school.

Well if that doesn’t warm your heart then nothing will.

If we back up 5 years this boy’s future was about to end at grade 7.  And what about his friend? Was being in that principal’s office at just the right time, a coincidence? I don’t think so, in fact I know so. Because this is only one of countless stories I could tell of amazing love and amazing connections.